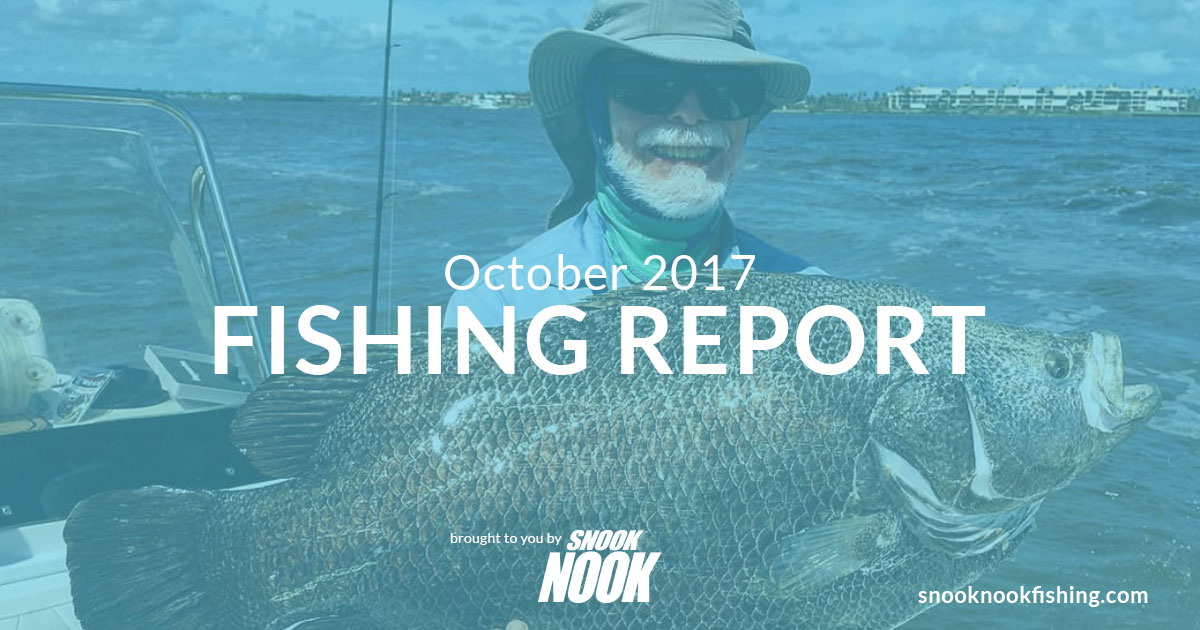 Our October weather reminds me of those wacky waving inflatable arm flailing tube men you see outside of a new business, it’s all over the place! Mother nature has been raining on our parade for a month it seems, add 25mph winds and conditions can get pretty tough. Even with lack luster weather, anglers are still enjoying some great catches so lets get to it.

To start it off, this past Wednesday I attended an FWC workshop on Goliath Grouper. The purpose of the meeting was to gather public input on the future management of Goliath Grouper, including the potential for a limited open season. The turnout was fairly good, anglers, divers and concerned citizens all gathered in the historic Flagler building in downtown Stuart. Roughly 60 people were in attendance and I can tell you the majority of the room was filled with divers against any kind of open season. Their fear is that it may decimate the population, thus hurting those running dive businesses that target Goliath grouper for viewing, stating divers are willing to pay as much as $200.00 per person to do so. Several FWC biologists and officers were in attendance and South regional director Dr. Thomas Reinert was there to field questions afterwards. The workshop contained some great information as well as many unanswered questions. Everything was hypothetical from the proposed slot limit (47”-67”) to the projected 100 tags that would be allotted state wide if an open season is decided on. If your an angler interested in any of this I urge you to visit Saltwater Public Comments and take the time to write your opinion. A 34 question survey was given at the end of the workshop, the survey is open to everyone and can be found here. In my opinion we are a long way from an open season but these discussions are a great way to get the ball rolling.

Inshore fishing has been fairly good despite all the freshwater and wind. Anglers fishing the Indian River from the Jensen Causeway north have found better water, still brown but better none the less. Lots of large Tarpon in our area around the bridges, spillways, inlets and deep cuts like little mud creek north of the power plant. Captain Jonathan Earhart of Chaos Fishing Adventures has landed quite a few fish well over the 100lb mark just this past week. The baits of choice have been live mullet from 4”-10” accompanied by the appropriate size circle hook. The last thing you want to do is bury the hook in the mullet, you want the hook to easily come out of the bait and go into the fish when you get a bite. Hook the mullet either in the top lip, behind the head or just behind the anal fin. Great numbers of slot sized Redfish over the last few weeks from the west side catwalk at the Jensen Causeway, Vitola Park and the docks along McArthur Blvd have all produced with live shrimp working best. If using artificial baits go to a darker color like root beer or new penny, a little scent goes a long way in this churned up water. Throwing Gulp baits or adding Pro Cure super gel to any of your favorite soft plastics will definitely increase your bites. One of our great customers Jerry was fishing the St. Lucie inlet this week with live mullet looking for a Tarpon, much to his surprise he hooked and caught a 22lb Triple Tail, way to go Jerry! Keep a lookout around any channel markers, floating debris and/or crap trap buoys, they all are a good place to find those Triple Tail.

Offshore has been bumpy to say the least, with very few boats breaking the inlet due to poor conditions. Despite the lacking of reports there has been an uptick in the dolphin fishing with 100′ being an average depth. The Lady Stuart reported some good Mahi fishing this week, most fish were in the 6-10lb range. Accompanying them in the ice box were Kingfish, Mangrove Snapper, Mutton snapper and Red Grouper. Hopefully the weather will settle soon and give the rest of us a shot.

The beaches have been near unfishable with the heavy wind and erosion over the last month. According to the folks north of us the mullet run is still in full force so we still have some time for conditions to get right, a little north wind and those baits are in our backyard. Usually we see mullet through the first part of November so don’t worry beach fans, there is still time!

A BIG thanks to our customers for all the support, we strive everyday to make the Snook Nook your one stop shop for everything fishing!

Owner of The Snook Nook located in Jensen Beach, FL.